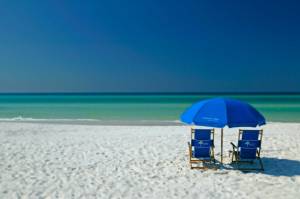 The 1890’s was a period when American taste and interest in vacationing at the beach in the summer was popular. In several parts of Florida, small beach resort communities began to grow. By 1911, Grayton Beach was a small resort for beach goers from DeFuniak Springs and elsewhere in the county. As with many developments in the 1920’s, promotion and advertising were widely used to market resort areas. Newspapers in DeFuniak Springs (and probably in Alabama) carried advertisements that promoted Grayton Beach as a place to buy a beach lot and as a place to relax and recuperate from daily life.

By 1923, new houses replaced the cottages that had been located on the beach since before the turn of the century. Visitors continued to come from Alabama and Walton County. J.J. Kinney and B.B. Murray were among several who built houses at the beach. Their houses were described as “air castles” with low hip roofs called storm roofs and large screens with hinged shutters to protect from hurricanes.

South Walton County was an important Native American settlement as indicated by European artifacts that were found at the site, indicating the first meeting between early explorers and Native Americans. The crescent moon shaped mound is not protected and has been returned to the Creek Indian Nation. Florida State University performed an archeological dig evident by the deep cut that traverse the mound remains. Today it is entirely fenced in and is once again in a protected resting place for our early ancestors. From a geological standpoint, the location of the town and mound was ideal. Horseshoe Cove, Filler Lake, Morris Lake, and Campbell Lake all line up as if at one time there was an entrance to Choctawhatchee Bay from the Gulf. This strategic position allowed the Indian settlement to harvest crab and shellfish from the bay and to fish the shores waters of the Gulf. The area is abundant with fresh water streams that spill into the various bayous. Refuse shell mounds are heavily scattered about the area. The site is just inside of a tree and vegetation cover on the west side of Mack Bayou Road. A chain link fence surrounds the huge elongated mound, which is reportedly as one of the top three largest mounds in Florida.

The First recorded cabin was in the late 1860s, but it became a major bay community in the early 1900s. As a major steamboat landing, the Town of Santa Rosa boasted a population from 850 to 1,200 people at its height. However, a crop disaster and vicious hurricane devastated the town. The town eventually took on a sinister “Wild West” tone after a recorded posse chase took place and a murderous feud caused division in the settlement. Shortly after these events the residents requested three or four steamboats from Mobile and then left en masse. The empty town hotels, churches, stores, café, and cottages turned Santa Rosa into a true ghost town. The remaining locals and North Bay Shore residents eventually dismantled the town for lumber.

Now Cessna Public Park (named for the town founder) sits on Hogtown Bayou where the town warehouses were located. It’s a happy and quiet place to picnic. It also has a fishing dock and restroom facilities. Next to the park is Bayou Arts & Antiques, located on the Old Sugar Cane Mill site. A room is dedicated to various pictures showing what the town was like in its heyday. The fisherman’s Chapel has also been restored. History information of the town is available free of charge at the park.

There is a thriving art scene along Scenic 30-A. The Walton County Tourist Development Council sponsors an “Artist of the Year” program to highlight the work of area artists. There is also an abundance of art studios, as well as antiques and craft stores. In the fall, the Autumn Tides celebration brings festivals and events to the area. In Seaside, the Seaside Repertory Theatre presents live shows during Summer Season Theatre from Memorial Day to August. ArtsQuest, a week-long event held each May, includes a fashion show, garden party, tours of art galleries, along with a juried fine arts festival.

The first building, a beach cottage, is thought to have been built in 1880. However the first “recorded” building is believed to have been built during the 1890s, and was most likely a hotel for those who made the onerous overland and across-the-bay trip from the northern railroad town of Defuniak Springs, located about 35 miles north of Grayton. The structure is still standing and was called Washaway due to its underpilings being washed out in a hurricane. By 1911, the small community was a little more than a collection of shacks nestled under the magnolias and live oaks. The poor condition of the road made it extremely difficult to travel to the village.

In 1919, a group of Iowa bankers purchased property around the community and proposed a road from Point Washington to Grayton. The project failed and Grayton sat almost forgotten. Then, in the 1920s, W.H. Butler moved his family there and a renaissance began as he restored many of the rundown cottages, platted new home sites, built a hotel (destroyed in the 1936 hurricane), and even gave some properties away to friends. The friends, in turn, “spread the word” around the surrounding localities and southern Alabama, praising the natural beauty of the sea side community. In 1926, Van R. Butler, the son of W.H.Butler, continued the renovations and land purchasing and promotion. By the 1930s, more “air castles” as they were known (low hip roofs with wide screen porches) punctuated the sand dunes and shady hammocks.

This 1800’s logging settlement boasted having the largest house in south Walton County. The two-story architecture found in Point Washington is a blend of Antebellum (with wrap-around shady porches), and a touch of Victorian. The wood mill, which sat at the edge of the bayou, burned down three times. Enormous live oaks now grace the mill site and open water breezes cool the expansive garden grounds. The now historically dedicated home and gardens were built by the Wesley family between 1895 and 1897. By 1953, the Wesley family died out and Lois Maxon had purchased the mansion. Upon her death she left the home and grounds to the State. Tours and a more in-depth history are available from the State Park ranger and preservation volunteers.

Point Washington experienced two small invasions during the Civil War. The first account was in early 1864, when Federal Captain James Galloway who was tasked with locating deserters, burned the town’s saw mill and attempted to capture the blockade runner-the schooner “Champion,” which operated out of Choctawhatchee Bay. The town was again enlisted as a camp and temporary Civil War headquarters for a rebel prisoner holding site for General Alexander Asboth who, in later 1864, set out from Pensacola to burn Marianna and invade and capture the surrounding territory. The quiet backwater town boasted a population of 350 citizens during its peak and had a school (a little red school house), two or three general stores, a post office, turpentine stills, and a total of six timber mills dotting the shores around Point Washington. The first known church was originally a United Methodist Church built in 1893. The Methodist Church was laid out using the timbers from another building built in the 1890s across the intercoastal waterway. The church was literally under an open air arbor with a fence built around it to keep the wild roaming hogs from entering the services. Music was provided by piano on the back of an old pick-up truck. The story book architecture is reminiscent of a small New England chapel. The Corner Stone Assembly Church was built in 1940. The 1938 school, located under the shade trees is a design straight out of the Norman Rockwell period. One walk through the hall and classrooms makes the saying “as American as apple pie” a real life experience. 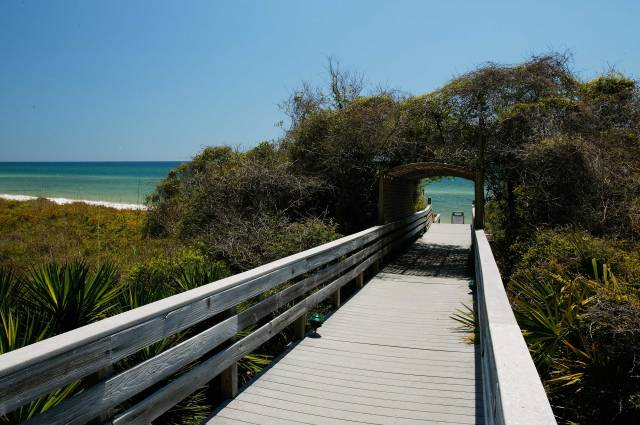